How Do I Get Rid of Particles in Water?

Those colored flakes in your water shouldn’t be there.

Fortunately, the tools to get rid of them are easy to get and use!

White or brown, black or blue—particles in water come in many different colors, none of which are a welcome sight in your glass!

If you recently noticed any of these colored flakes in your water, then you’ve come to the right place. In this post, we’ll help you identify what the particles are and any threats they pose to your home and health. Then we’ll give you practical steps you can take to get rid of them.

So, keep reading to learn:

What are the Particles Floating in My Water?

Let’s start by answering the big question: Why are there specks in your water? These floating particles can come from several different sources. Sometimes they’re little pieces of rock or dirt that the water collected as it flowed through the earth. Other times, the flecks are debris from malfunctioning appliances or rusting pipes.

The best way to identify the likely origin of the particles in your water is by their color.

As we mentioned above, the most common colors for water specks are white, black, brown and blue. However, we should note here that white specks can sometimes have a tannish tint to them, and brown specks can also be on the orangish side.

So, closely examine your particles. Then come back and read about the meaning of the color below.

Floating white particles are most often small bits of calcium or magnesium carbonate. Groundwater collects high concentrations of these minerals as it flows through the earth and turns into hard water as a result.

At Angel Water, we serve two regions that have very hard water: Northern Illinois and Southeast Florida. Hard water is also a common problem throughout the United States.

White calcium carbonate particles are particularly noticeable in water from the fridge. The reason for this is the colder temperature causes the calcium carbonate to solidify into flakes that are more visible than they would normally be.

A malfunctioning water heater can also sometimes produce white particles in water. As water heaters get older, their plastic dip tubes start to wear out and disintegrate. So, those tiny pieces you’re seeing could be little pieces of the dip tube infiltrating your system.

Brown flakes in water are usually either dirt, sand or rust. If you have well water, then the particles are likely dirt or sand from your private well. If the pieces are hard and irregularly shaped, they could be rust from the pipes in your home or municipal water mains.

The brown flakes could also be a symptom of a malfunctioning water softener. Salt-based water softeners have thousands of tiny little beads inside them, which soften the water as it flows over them. However, sometimes those beads can escape from the softener and get into your home’s water supply. You can easily identify this type of brown particle because each fleck is uniform in size and spherical.

Black specks in water typically indicate something needs repair. If the particles are very hard and small, then that something is likely your water filter. Water filters use granular activated carbon as part of their filtering process, and as the filter gets older, specks of carbon can break off into the water.

Solid and rubbery black particles in tap water often come from a degrading faucet washer or gasket. However, if the particles are tar-like and easy to smear between your fingers, then a disintegrating supply line hose is probably the culprit.

Black particles also frequently show up in well water. In this case, the specks consist of things like soil, mud, sand, organic matter and animal waste, which can infiltrate a well when it gets damaged.

Blue specks in water come from the same calcium and magnesium carbonate minerals that cause white particles. These white flecks turn blue when they flow through copper pipes. Copper plumbing most frequently causes this chemical reaction right after installation and when it gets old and starts to decay.

Are Particles in Water Safe to Drink?

For the most part, drinking water with particles in it comes with very few health risks. For example, white particles in water caused by calcium and magnesium carbonate are safe to drink. However, these minerals also cause many annoying problems around the home, such as dry, itchy skin, cloudy dishes and discolored clothing. So, you’ll probably still want to get rid of them.

Other colored particles are potentially harmful and unpleasant to consume. For instance, black particles in well water may indicate the presence of animal feces that could make you sick. And brown specks of sand and dirt don’t make the water taste particularly good.

Particles in water also often don’t bode well for the health of your plumbing system and appliances. Your water heater, filter, softener, faucets or pipes could all be causing the problem by falling apart slowly. So, you’ll want to get them fixed sooner rather than later to prevent the problem from becoming more expensive to repair! 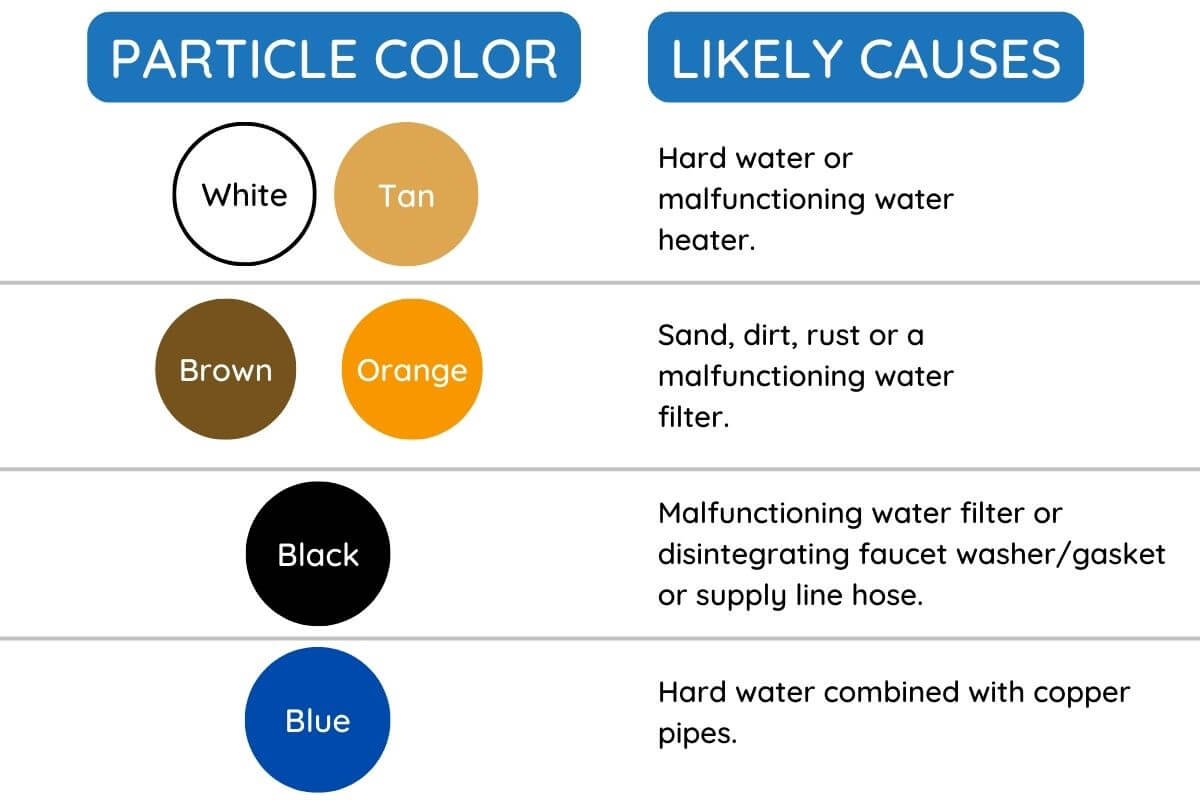 How to Get Rid of Particles in Water

You may be embarrassed by them, scared of them, annoyed with them or all the above. Whatever your reason for wanting particles in your water gone, you can get it done with the right water treatment equipment.

So, which solution is right for the type of particles you’re dealing with? Here’s how to figure it out.

Start By Testing Your Water

Don’t assume you know what the particles are just because you know their color. As you probably noticed in the sections above, some colors have multiple options for what the cause could be. For this reason, it’s a good idea to test your water to definitively identify what those specks are.

An EPA-certified water test may also reveal other toxins in your water that you weren’t aware of. This knowledge will allow you to choose the best water treatment equipment to make your water healthier and safer.

The water test will likely show that calcium and magnesium carbonate are causing your white or blue specks. In this case, your best course of action will be to purchase a salt-based water softener.

The best salt-based water softener systems are NSF 44 certified. This stamp of approval indicates a softener has gone through multiple tests to prove its effectiveness.

Water with brown or black particles may test positive for bacteria or toxins that could make you sick. The best solution for this problem is a whole house water filter, such as a chlorine injection system or ozone filter.

These systems oxidize bacteria and other toxins and remove them from the water. As a result, every tap in your home produces the cleanest particle-free water possible.

Your test may also reveal that natural toxins aren’t causing your particles. Rather, your water filter, softener or heater could be malfunctioning and in need of repair. At Angel Water, we can help you with this, too. Our licensed experts repair and maintain all makes and models for residents in Chicagoland and the West Palm Beach, FL, region.

As you can see, particles in water may seem alarming but getting rid of them is easy. Once you know what those specks are, you’ll be able to find the right system to filter them out and provide long-term protection for your health and home.

Angel Water is here to help you with all of this. We provide free home water tests for homeowners in Barrington, IL, West Palm Beach, FL, and the surrounding regions. You can also find a wide selection of NSF-certified systems in our product showroom and get them installed and serviced the right way by our licensed plumbers.

Please call us today at 847-382-7800 or fill out the form below to talk with an expert or schedule a free consultation.