Why Does My Stomach Hurt After Drinking Water?

If your stomach hurts after drinking water, there’s no need to panic. Learn the potential causes of this problem and how to solve them!

There are many potential causes of stomach pain after drinking water. Some are as simple as drinking too fast or even drinking water that is too cold. Others are much more serious and involve water contamination.

The good news is there are solutions to all these problems! In this post, we will cover the following:

Why Your Stomach Hurts After Drinking Water

There are many ways drinking water brings about stomach pain, but the water itself isn’t always the direct cause. In some cases, the water you’re drinking is perfectly fine, and the stomach pain either comes from how you’re consuming it or a pre-existing medical condition.

So, before you jump to conclusions and assume your water is toxic, let’s rule out some of these other potential causes.

Many pre-existing medical conditions can also cause stomach pain after drinking water. These include stomach ulcers, irritable bowel syndrome (IBS), inflammation, gastroesophageal reflux disease (GERD) and more. For this reason, it’s a good idea to consult your doctor to rule out these causes.

If the problem doesn’t stem from how you’re drinking the water or a medical condition, then there’s likely something wrong with your water. This cause is the one we’re most concerned about at Angel Water. Our mission is to make people aware of the toxins in their water that are threatening their health and help them get rid of them.

In that spirit, we’ve compiled a list of the contaminants most often associated with stomach issues.

Here’s an overview of these toxins and where they come from.

One of the most serious pollutants that can cause stomach pain is lead. While the dangers of lead poisoning are now well known, people were largely ignorant of them back when city water infrastructures were first built. Thus, major cities like Chicago used lead pipes for their waterlines. This practice resulted in large-scale contamination as lead from the pipes leached into the water as it flowed through them.

While we have since come to our senses and realized this was a mistake, lead contamination remains a major problem today. In our local Chicago region, 80% of properties still get their water through old lead pipes. The government has been slow to fix this problem, and even some efforts to fix it, like partial lead service line replacements, have only made the problem worse.

Arsenic is a naturally occurring contaminant known to cause stomach pain and other issues when consumed in large amounts. The toxin can also infiltrate the water via pollution from industrial or agricultural processes.

Many regions of the country, including Northern Illinois, frequently encounter high levels of arsenic in their water. This is reason for concern since the World Health Organization classifies it as a carcinogen. So, it’s important to get your water tested and take proper precautions if you’re concerned arsenic is making you sick.

Coliform is a type of bacteria often found in well water. These bacteria live in plants, soil and the gastrointestinal tract of animals. Coliform in well water can come from many different sources, such as waste disposal, cross-contamination from sewage plants or leaking well caps.

Coliforms may not always give you gastrointestinal illnesses, though. If you have been consuming them in small amounts over time, you may have built up an immunity to them. However, the presence of large quantities in water could indicate that harmful pathogenic microbes are also present.

This microscopic parasite is the leading cause of waterborne illnesses in the United States. It is protected by an outer shell, which allows it to survive for a long time outside of a host. The exterior is even tough enough to survive chlorine disinfection.

Cryptosporidia often get into drinking water when the water mixes with human or animal fecal matter. Consuming contaminated water can cause cryptosporidiosis, a gastrointestinal illness with diarrhea, stomach pains and fever. These symptoms can begin 2-10 days after consumption.

The body contains many harmless strains of bacteria that are like E. coli. What makes E. coli especially dangerous is that it generates a potent toxin, which can make you very sick. Some rare strains of E. coli, such as the strain 0157:H7 are particularly harmful. Recent outbreaks of disease caused by E. coli 0157:H7 have generated much public concern about this organism.

There are many ways this type of bacteria can infiltrate local water supplies, including sewage leaks and farm runoff. It has been found in cattle, chickens, pigs, and sheep. Most of the reported human cases have been due to eating under cooked hamburger. E. coli also gets into homes with private well water since the water receives no municipal treatment before reaching the tap.

Giardia is a parasite known to take up residence within the small intestine of humans and other animals. When this happens, it results in a gastrointestinal illness called giardiasis. Some common symptoms of drinking bad water containing giardia include fatigue, weight loss, stomach cramps, vomiting and headaches.

This parasite often lives in fecal matter. So, the most commons sources of contamination in drinking water include animal feces, improperly disposed diapers and runoff from nearby farms.

You have probably heard of Salmonella because of how frequently it causes food-related illnesses in the United States. However, the harmful bacteria can also infiltrate drinking water when it encounters human or animal feces.

Salmonella frequently gets into private wells through sewage overflows and stormwater runoff. Storms and flooding can also make wells even more vulnerable to Salmonella contamination.

Shigella is another strain of bacteria that lives in feces. It typically infiltrates drinking water through sewage contamination or flooding and can cause bloody diarrhea, fever and stomach pain. These symptoms usually start 1-2 days after consumption and can last a week or more.

Aside from stomach pain and nausea, all these contaminants come with additional health risks. The severity of those risks depends on which toxins you’re dealing with.

Lead and arsenic contamination can cause very severe health effects. Lead poisoning often comes with issues like anemia, hypertension, coma, behavioral and developmental issues in children and more. The mental and behavioral damage lead can do is often irreversible. Likewise, arsenic can increase your risk of bladder, lung and skin cancer, cardiovascular disease and kidney damage.

The rest of the bacteria listed above all bring about unpleasant symptoms, including diarrhea, fever, headache and stomach pain. But fortunately, infection is rarely life-threatening. The age groups most at risk of severe illness are the very young and the very old.

If you come down with a waterborne illness, we recommend consulting your doctor about the best treatment options. These will likely include bed rest at home with plenty of fluids and pain medication. However, some more severe cases may require hospitalization. 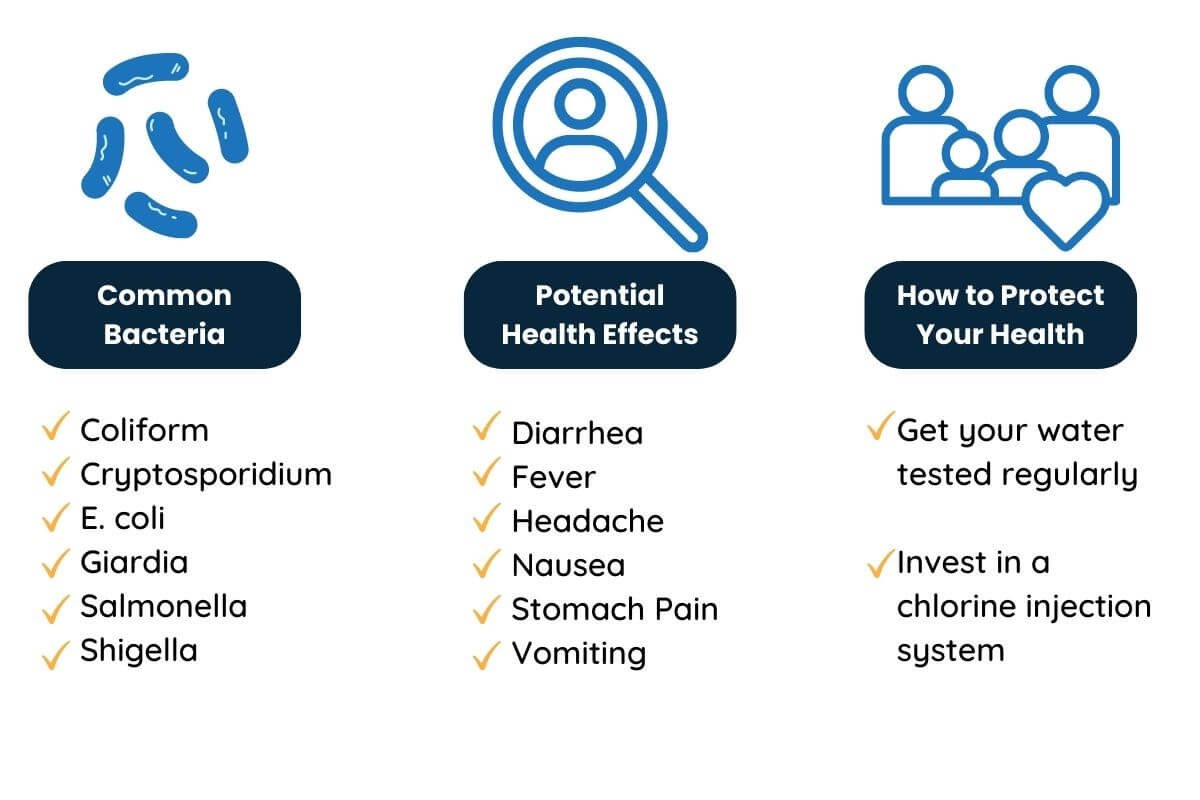 How to Prevent Stomach Illness from Drinking Water

This long list of contaminants may seem overwhelming, but don’t let it get you down. You have the power to protect your health and family! By investing in the right water treatment equipment, you can keep the water in your home safe and clean.

Here are some steps to follow to get the pure water you deserve:

The first step is to identify which toxins are in your water. A water test is the only reliable way to do this since it’s impossible to tell by the look, taste or smell of the water if disease-causing organisms are in it.

The Illinois Department of Public Health recommends that well owners test their water for coliform bacteria at least once a year. If you have experienced bacteria problems in the past, it is recommended that you test your well more frequently.

The result of your water test will tell you which water treatment equipment you should get.

If the test reveals that you have lead, arsenic or many other pollutants in your water, then a reverse osmosis (RO) system will likely be your best choice.

RO systems put water through multiple layers of filtration to ensure it comes out as clean as possible. This process includes forcing the water through a semipermeable membrane, which keeps contaminants on one side while allowing only the purified water to pass through. Not only does this process remove lead and arsenic, but it also takes out chromium-6, mercury, cyanide and many other harmful toxins.

However, not all RO systems are created equal. The best and most dependable systems are NSF 58 certified. For a system to earn this certification it must go through extensive testing to ensure it works properly. For this reason, an NSF 58 system is a system you can trust.

Get a PurAClear Chlorine Injection System to Remove Bacteria

Your water test may also show that you have coliform, E. coli or any of the other bacteria listed above. In this case, you’ll want to consider getting a chlorine injection system for your home.

A chlorine injection system acts as your home’s personal water tower. It takes the bacteria-infested water and injects it with chlorine to disinfect it. Then a carbon filter removes the chlorine and sends the newly clean water throughout your home.

A trustworthy chlorine injection system we recommend is the PurAClear. What makes this system special is it has a patented valve that applies the exact amount of chlorine dosing the water needs. Other systems base the amount of chlorination off the well pressure tank, which often leads to overdosing. You won’t have this problem with the PurAClear.

Learn More About the PurAClear

At Angel Water, we help families in Northern Illinois and Southeast Florida identify and eliminate problems with their water every day. We offer EPA-certified water testing and a wide selection of NSF certified RO systems and chlorine injection systems to choose from. Plus, our team of licensed plumbers installs and services the equipment to keep it running right.

So, if you need help in Barrington, IL, or West Palm Beach, FL, give us a call today to schedule a free home assessment.